July was a busy month, but somehow I managed to read eleven books during the month. I’m so thankful for the Kindle app on my tablet and my library card that keep me well-stocked with books! Here are my thoughts on the books I read this month… 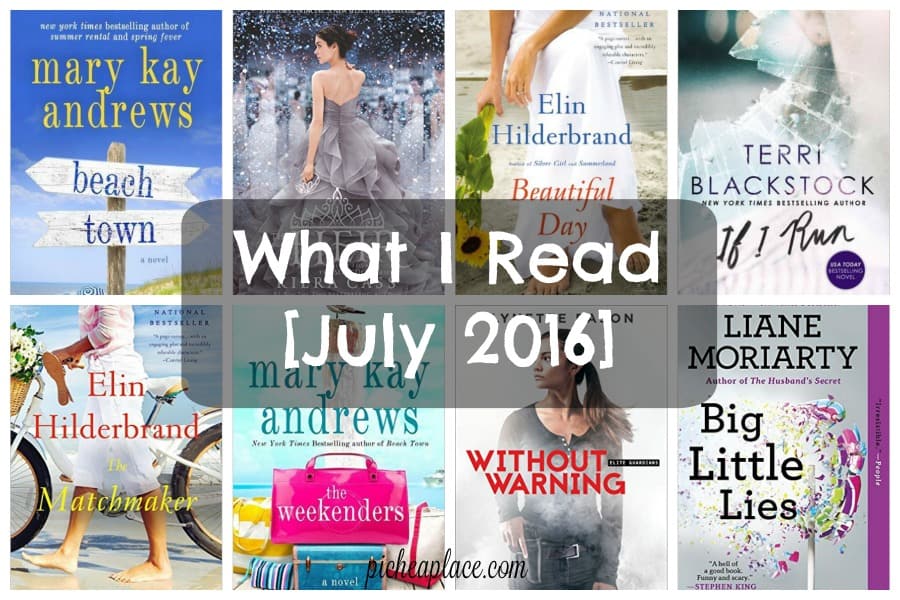 I was actually slightly disappointed with Beach Town – it definitely wasn’t my favorite title from Mary Kay Andrews. While the premise of the story was good, I felt like there were parts of the story that moved too quickly, especially in terms of the relationship of the main characters. I did enjoy the setting of the book – in a rundown town in the Florida Keys – and the overall plot. It was an enjoyable read, but it didn’t hold up to my expectations from this author.

I was actually surprised that I liked this book as well as I did. I had struggled with some of the other titles I’d read recently by Elin Hilderbrand and was ready to give up on her, but Beautiful Day brought me back around. The plot was well-developed and the characters were more relatable than some of her characters in other books. There were just enough twists to keep me turning the pages, and the incest among the main characters wasn’t nearly as front-and-center as many of her other titles. It was less “who slept with whom” and more “how do we find happily ever after.”

I really like Liane Moriarty’s style of story-telling. She inserts just enough details about the “ending” at the beginning to keep you trying to guess how all the pieces fit together as you read. This particular book was well-developed and actually threw me for a loop when the ending was revealed – and that’s not easy to do! If you enjoy drama, you’ll enjoy Big Little Lies.

If I Run by Terri Blackstock

It had been years since I’d read anything by Terri Blackstock, but I remembered loving her suspense fiction in the past, and If I Run did not disappoint. I was actually disappointed when the book ended and I discovered that the library didn’t have the next book in the series available to borrow yet (due to be released in March 2017)! If you’re looking for a well-written suspense thriller, I highly recommend If I Run!

The Heir by Keira Cass

The characters from the first three books in The Selection series have grown up and their daughter is now hosting a selection of her own. I enjoyed the twist on the original plot (from prince to princess) and the different struggles that Eadlyn faced as opposed to her father in his selection process. The story was well written and made for an enjoyable and fast read. I’m looking forward to getting my hands on the final book in the series, The Crown, soon! [I also enjoyed three brief novellas in this series: The Prince, The Guard, and The Queen.]

The Matchmaker by Elin Hilderbrand

I struggled with this title from Elin Hilderbrand. I wasn’t sure where the story was going at times, and I felt like it moved slowly. One of my biggest struggles with this author was heavily prevalent in The Matchmaker – the celebration of infidelity. This particular title was a bit too heavy on the infidelity and too shallow on a quality plot.

The Weekenders by Mary Kay Andrews

As I read The Weekenders by Mary Kay Andrews, I found myself vacillating between liking it and being bored by it. In the end, liking it won out. While certain elements of it moved more quickly than I thought sensible (particular the romantic relationship between the main characters), the plot was interesting and I enjoyed the mystery woven throughout.

Without Warning by Lynette Eason

I received free access to a digital ARC in exchange for my honest review.

I’ve been a big fan of Lynette Eason’s for awhile, and although my first introduction to the Elite Guardians series threw me for a bit of a loop, Without Warning was much more expected. I enjoyed the story line, and I thought the characters were well-developed and easy to relate to. The plot was semi-predictable, but it included enough twists to keep me turning the pages and reading into the night. I enjoyed watching the relationship between the main characters develop throughout the story, and the ending had a bit of surprise to it. I’d definitely recommend Without Warning to any fellow suspense thriller fans!

What have you been reading this month?

Previous Post: « How to Throw an End of Summer Party
Next Post: Back-to-School Breakfast Ideas + Sunrise Smoothie Recipe »
Pichea Place is a participant in the Amazon Services LLC Associates Program, an affiliate advertising program designed to provide a means for us to earn fees by linking to Amazon.com and affiliated sites. See our complete affiliate disclosure here: Disclosure and Privacy Policy.