While the kids have both grown up hearing the basics of the Easter story, including the resurrection of Christ, I decided that The Resurrection study from GrapeVine Bible Studies would be a perfect tool to take them deeper into the details as we prepare for the upcoming Easter season. 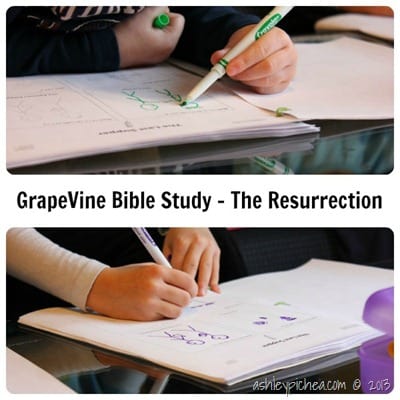 Using GVS in our Homeschool

We have loved using GrapeVine Bible Studies as a part of our daily homeschool routine for Jenny over the past several months {see our reviews of Joseph, Esther, and the Old Testament Basics}, but David had been feeling left out. When I saw that GrapeVine was introducing traceables as an option for their student workbooks, I was excited to get my hands on a new study so I could try and include David.

As I’ve done in the past, I chose to order the multi-level eBooks (teacher and student) in order to have the greatest flexibility with our personal use of the GrapeVine Bible Study. I then printed out only the pages of the traceable student eBook that we were going to be using. I bound the pages together using a three-hole punch and some yarn (I really need to invest in a binding machine!), creating a “Bible time notebook” for each of the kids.

I also added some lined paper after each lesson in Jenny’s notebook for her to be able to answer the review questions and write out her memory verse.

I wasn’t sure how well David would like the traceables, so I was pleased when he saw his “Bible time notebook” and eagerly started tracing the pictures in the first lesson. 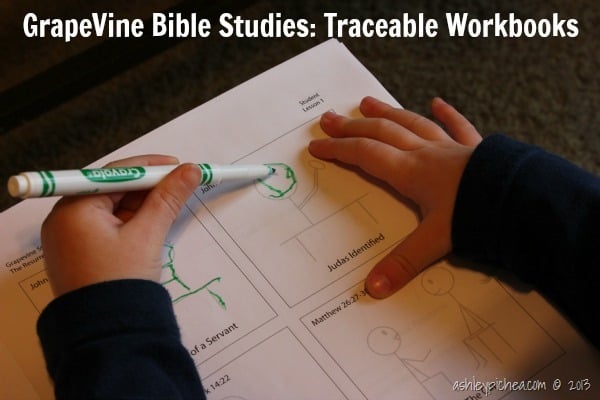 I think it’s safe to say that he LOVES the traceables and the fact that he is now included in this part of our daily homeschool routine!

Jenny has also enjoyed using the traceables with this study (I gave her the option of using them or doing the study in her journal as we’ve done in the past), in lieu of having to attempt the stick figure drawings on her own.

My only “disappointment” with the traceable student workbook is that there are no traceable memory verse pages. (This is due to GrapeVine Bible Studies’ desire to be able to be used with any Bible translation.) So, after a few lessons of not having any verses for David to trace, I decided to create my own.

I created a print version of the traceable memory verses for David, and then Jenny asked for a set in cursive (she’s really into learning cursive right now), so I create a set in cursive as well.

I created both versions (print and cursive) using the ESV Bible, as it is our family’s standard version of the Bible.

Disclosure: I received a free copy of The Resurrection study from GrapeVine Bible Studies in exchange for my honest review.